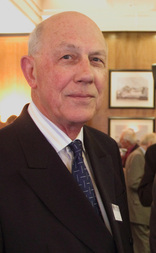 Anthony Scholefield
FUTURUS was founded by Anthony Scholefield in 2003 to develop an understanding and analysis of major political and social issues which were not being addressed by the British political parties and other policy-making and research bodies.  Some issues, such as the future demography of the UK and Europe, mass immigration or the real costs of Britain’s membership of the EU, were generally considered too controversial to be discussed by most policy bodies.  Other matters, such as British entry into the euro, as well as the real nature of the financial crisis of 2008, and the long term insolvency of the western Welfare State, were treated superficially.

A constant theme of the think-tank is to examine reality.  This in turn requires proper accounting and careful calculation, which are not generally addressed by political parties or the media.

FUTURUS will continue to provide in-depth analysis of the fundamental challenges facing the UK and provide an intellectual basis for political action.


ANTHONY SCHOLEFIELD graduated in History from Oxford University and, later, in Economics from London University.  His career began as an accountant and he was, for many years, a self-employed businessman.

He is the Director of FUTURUS, a think tank specialising in EU and immigration matters.

He co-founded the UK Independence Party in 1993, was the Party Secretary and, for some years, the Party operated from his offices.

He is Vice-Chairman of the Campaign for an Independent Britain.

He worked closely with the NO Campaign (to the euro) and has written various studies and numerous articles on the euro, the EU, demography, immigration and public finance.

His recent publications are Too ‘Nice’ to be Tories – How the Modernisers have damaged the Conservative Party (with Gerald Frost, 2011) and Warning: Immigration can seriously damage your wealth (2008).
Web Hosting by iPage